So it has been three weeks since I traveled to St. George, Utah for the marathon so I figure if I am going to write about it I should probably go ahead and do it.
After taking it easy at the start of the year, my goal was to be in shape and ready to go when training for St. George happened. I had planned on a 12 week plan, but you know what they say about the best laid plans. After straining my quad, a biopsy and minor surgery by the time July 1st rolled around I was wondering if I even wanted to train for St. George.
In the past, I have tended towards just running what everyone else was running when I trained for marathons, and this time I decided that since I was not in shape when I started training and I wanted to find a plan that would work for me I decided on Hal Higdon’s Senior Marathon Training Program. I decided on this plan because you could modify the 8 week plan, it was only running three days a week, and I have had trouble with overtraining in the past. I printed out the program and taped it to my fridge and decided to give it a shot. Even with the way the plan was written I did hills once a week and never ran more than six miles on my second weekday run, I also found a group that ran a pace I could manage so there wouldn’t be a lot of solo miles like there have been in the past. 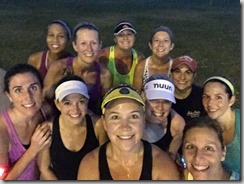 These girls saved me this summer. I won’t even say how much work it was to get everyone in the same place, with the selfie stick that morning.
So I ran through July, August and September in the heat and the humidity of our Oklahoma summer, and while I wasn’t thinking this would be a PR kind of race for me I was proud of the fact that, unlike last summer, I had actually run every mile instead of walking. I felt confident that I could run the 26.2 miles even if they weren’t super speedy.
Fast forward to October 1st and we were headed to Utah. 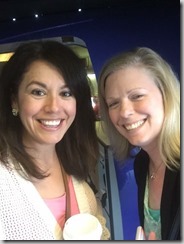 Pre flight selfie. We wanted to make sure we got the plane in the background.
So we fly into Vegas, get the rental car and drive to St. George, check into the hotel, get some dinner and then I have the worst night’s sleep ever. After a two mile shake out run on Friday morning where my legs felt completely awful, we headed to the expo to pick up our bibs and grabbed some lunch and decided to drive the course.
I will say that Utah is beautiful, but this course scared the crap out of me. I loved the point to point aspect, but even though it’s billed as a downhill race there were some uphill portions too.
The starting line was pretty cool though. 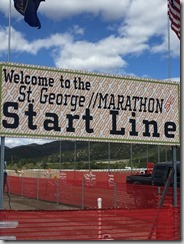 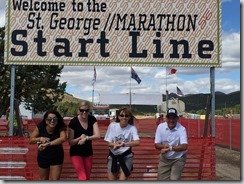 They had flags from every state/country that had a participant, how cool is that? 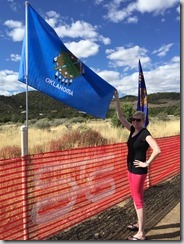 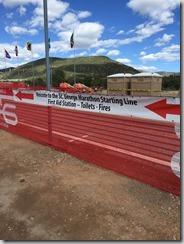 We headed back to the hotel, Rochelle and I ended up getting some not very good take-out and by 8:30 I was exhausted. That was about the time I realized that my sunglasses had broken in my suitcase. That was a bummer. Luckily Tim and Christie headed out to get some last minute supplies and picked up a pair for me.
I did get some sleep and then was up somewhere in the 3 o’clock hour. Everything was running smoothly and then I got thrown off a bit by a few panic moments before we left the hotel and managed to leave without a bottle of water. We made it to the buses and didn’t have to wait too long before we were on one headed up to the starting line. 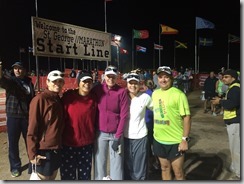 It was pretty chilly up there. We got in line for the port-o-potties and then found a spot by one of the fires to relax before the start. I found a spot near the 4:30 pace group and just planned to go out and enjoy the day. Which I did, for 17 miles.
I chatted with some other runners and walked some of the uphill spots (miles 7-9 were no joke), and managed to keep myself either in front of or right around the 4:30 pace group. It really felt like a good day.
At the water stop around mile 17 I walked for a few minutes and was going to take a picture of the view. A guy that was walking by me offered to take my picture. 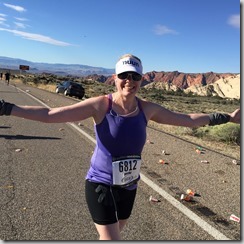 This was the last point I felt good for the rest of the race. I turned around and almost immediately I had sharp, shooting pains in my right leg that started above my ankle and would shoot up my leg and down into my foot ever time I stepped on my right foot.
It has been 3.5 years since my tibial stress fracture, but that one started exactly like this. Mid-run, shooting pain that hurt with every step. I knew I was in trouble. In an instant I went from feeling like I was having a great day to feeling like it was the worst day ever.
So what did I do? Well what I should have done was stop. I should have found the next medical tent and called it a day. But that is absolutely not what I did. I walked. I walked for NINE MILES, on what was in fact a tibial stress fracture. A bunch of people told me that I should have stopped, and yes I know that I probably should have, but when you are out there it’s hard to quit.
I walked 9 miles at about a 17 minute pace. It took forever! I cried. I cried a lot. I managed to finish about 8 minutes slower than at Chicago last year, I can’t decide if that is a good thing or a bad thing. I did not get stung by a bee this year, so that’s a good thing, but that happened at mile 17 in Chicago last year. I think next marathon will be all about making it past mile 17 because that mile seems a little unlucky for me. I managed to not be the last person in our group to finish, thanks Tim!
So I finished, got my medal, got back to the hotel for the most frantic post check-out shower ever and then we were on our way back to Vegas. In case you were wondering, Vegas is the absolute worst place in the world to be with a leg injury. Just walking (and I use that term loosely because I was limping) from the valet to the room seemed like miles. I made myself presentable and we headed to Mesa Grill for dinner. 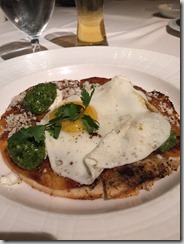 Cremini mushroom quesadilla with fontina and ricotta, topped with a fried egg. I ate ever bit and it was so good. 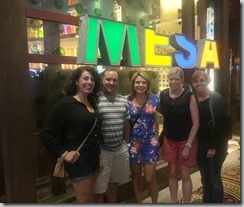 Rochelle, Tim, Kristy, me and Christie.
I did have a good time. I have spent the last three weeks wondering what I could have done different to have had a different outcome. I have been incredibly bummed about the whole thing.
I was back in the boot the Thursday after we got back, had an MRI the following Monday, and then told that I needed to be on crutches the next Thursday. After nine days on crutches I am back in the boot and I go back to the doctor on November 5th. If nothing else, after two less than spectacular marathons last year St. George showed me that I am not done with the marathon. I had a great day for 17 miles, I was feeling good and having fun, and I know that there are more races ahead.
Posted by Becky C. at 4:07 PM