Strides of March Half Marathon…

Last year we ran the Strides of March Half Marathon, it was inexpensive, local and had great volunteers. While I had been pondering the thought of running it again, it wasn’t until Saturday that we got signed up for it.

I have had very low expectations when it has come to my running this year. I have been running without my Garmin all year, and just trying to slowly get back into it. It’s amazing how freeing it has been. I haven’t seen double digits since we ran the Route 66 Half in November, before Thanksgiving so I knew that this half was going to be pretty tough.

I love that it only takes about 15 minutes to get to this race. Rochelle and I got there, found Kristy, Lauren and Carrie, got to hang out in our cars for a little bit and had time to hit up the port-o-potties and got to the starting line.

Carrie and I had been chatting about our race plan. Mine was mostly to not die, and hers was to take it easy. We decided to stick together and just see how it went. We did go out a little fast, but mostly because we were around other runners. We worked on holding back some, stopped at the water stops, and took a short walk break at about mile 4. Before we knew it we saw everyone else heading back and then we were at the half way point. 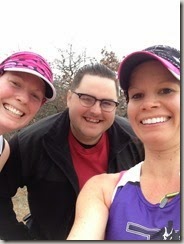 I convinced Carrie we needed a half way point selfie with the race volunteer.

We headed back and I was definitely feeling the miles, but we chatted away, listened to a little music, chatted with the volunteers and kept at it. The finish has a pretty good sized hill before the downhill to the finish. I made it up the hill and finished just behind Carrie in just over 2:05.

Not as fast as last year, but the fastest half since last year. I was very happy to be done. 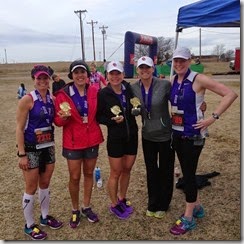 Post race with Carrie, Rochelle, Kristy, Lauren and I. Notice the three in the middle with their age group trophies for top 3 finishes. I didn’t even check on my age group until after I got home. Turns out I should have had one of those trophies too! Second in my age group.

Today I am incredibly sore. I feel like I have the body of an 80 year old. The memories are worth it though.

Next up, the Go Girl Half in two weeks. I can’t believe that I am doing two half this month. Here’s hoping I am getting back in shape and I will be less sore the next time.

Email ThisBlogThis!Share to TwitterShare to FacebookShare to Pinterest
Labels: half marathon, running, Strides of March