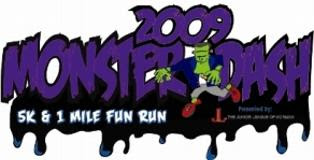 I completely forgot to post something about the Monster Dash that Stacy and I did on October 24th. Not a good race for me. My first problem was the fact that we participated in a Zumbathon the night before. Two hours of zumba, technically we only stayed for an hour and a half, the night before a 5k was probably not the best decision we've ever made. It was for a good cause, Komen for the Cure and it was pretty fun. I don't envision myself signing up for a bunch of zumba classes though. It was pretty hard on the knees.

The Monster Dash was fun, the course wasn't the most boring I've run, but I finished in just over 30 minutes. Other than boot camp last week I haven't run since. The guy in the Gumby costume deserved a prize for running in that thing. I would never have gotten up and said, "Hey, let me put this Gumby costume on for the race today." I did get passed by two women pushing strollers that didn't run the whole race and just sprinted at the end. Seriously, that's not winning!