It's been a while. It's been a hard summer personally and I haven't felt like putting a lot done on the blog.

About a month ago I decided that instead of a fall marathon I was going to shoot for a fall triathlon.

You might remember last September Rochelle and I tackled our first Olympic distance tri at the Redman, I've been throwing around the idea of the half ironman since then. About a month ago I decided that it was scary as hell, but all that crosstraining would make my body very happy.

After my quad strain in May, running in June was horrible. Even with the heat it has gotten better and I finally saw double digits on my Garmin about three weeks ago. Focusing on crosstraining has taken the pressure off my running and the result is that my running has gotten more comfortable and normal.

It is time consuming training for a HIM. I am just shooting to finish, since it's my first race at this distance, so I am trying to fit in as much training as I can.

The bike is the most worrisome aspect of the race for me. 56 miles is far and prior to starting this training cycle I hadn't ridden farther than about 27 miles. A week ago I got up to 38, and riding that far by myself is pretty boring.

I was happy to have a plan to get in about half of yesterday's ride with some friends. We set out yesterday morning in the east side hills. The dogs that looked to chase us were pretty scary, but we got through the hills and at a little ober 20 miles and headed to the flats on the west side of town.

I really felt pretty good out there, and I was on track to get in 40+ miles. I was headed back on Tecumseh when my wheel caught a rut in the road. It was enough to throw me off and I tried to correct but just couldn't avoid the curb that I hit. I landed on a sidewalk right next to a light post.

Thankfully, some very nice women saw it all and stopped. They got my bike off of me, called Josh, called 911, and helped to calm me down. One of them even got a small blanket out of her car for me to rest my head on while we waited for the fire fighters to get there. I am very thankful for the kindness of strangers.

I'm not gonna lie. I was a little humiliated, something so silly as a little rut in the road and I caused such a fuss. The firefighters helped me sit up and checked me over. We decided we didn't need an ambulance, once Josh got there he took me straight to urgent care. 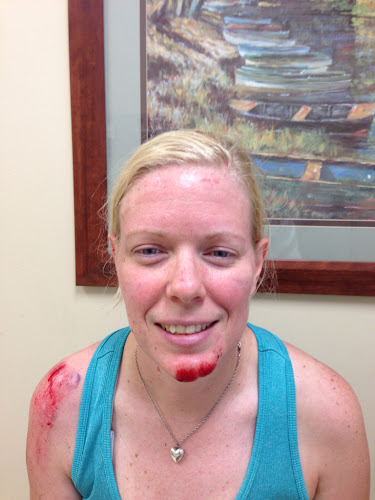 I basically landed on my chin. 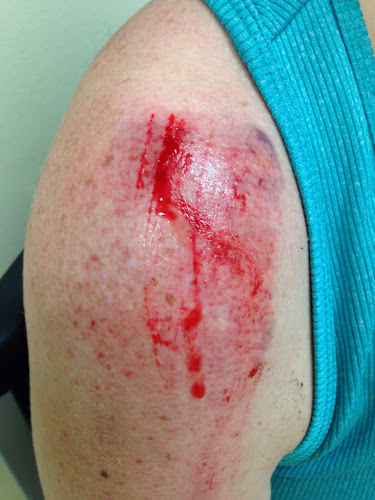 And my right shoulder. They X-rayed my shoulder and said I have a grade I AC (acromioclavicular) joint separation. 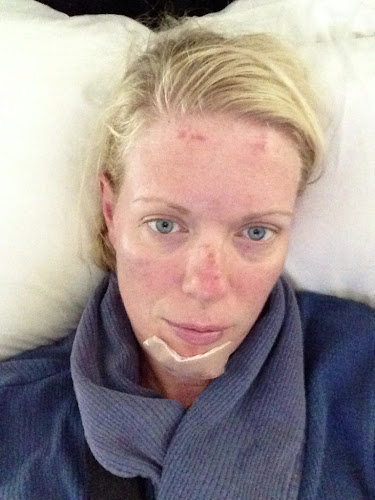 Those bruises on my forehead are from my helmet, the scratch on my nose is sidewalk, and my left cheek is bruised.

I am very lucky. It could have been so much worse. That being said, my whole body hurts today. I am waiting on a call back from my orthopedic doctor to follow up on my shoulder. I am going to need to get my bike in to get my front tire replaced and check to make sure the wheel and frame are ok. Oh yeah, and I need a new helmet.

Not sure what this does to my Redman plans. The thought of getting back on my bike scares the hell out of me. I guess we will dee what the doctor says.