So yesterday was one of the hardest days of my life so far. We had to let Lucy go.

I took her to the vet, knowing that she hadn't eaten in a week, that her legs no longer seemed strong enough to hold her, and that her belly was hugely swollen. I had to help get her in the car, and for the first time in her 14 years she just laid in the front seat and didn't move at all. She needed help getting up the two steps into the vet's office and she had lots of trouble just getting on the scale.

I have known that this day was coming for a while, most of her Lucyness has seemed to be gone for a while, but I think that I believe that if she could still follow me around the house that she was still there somewhere. I will probably never know how she always knew where I was, her sense of smell must have been how she could still find me. Even when it seemed hard for her to get up, if I left the room for just a few seconds she would always get up and follow me.

So after talking to the vet and knowing that more tests and more medicine wasn't the right thing for her, it was still hard to make the final decision. I will admit that I am a selfish person and I want her with me, but in the end I had to be an advocate for her and say that enough was enough. I believe that she knew how much she meant to me, and in the end she is at peace, where ever that may be. 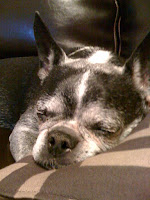 So for Lucy, I thought I'd list a few of my favorite things about this crazy dog that has blessed my life for over 14 years.

For the last 14 years, she was always glad to see me, or smell me, when I got home. She gave me unconditional love and I can only hope that I returned it. She was one in a million, a far better dog than we probably deserved, and our first baby. She will be missed.