I got a Nook for my birthday in 2011 and ever since then I have been reading non-stop. Sadly, you cannot check out books easily on the Nook from our local library and the selection is poor so my Barnes & Noble account has gotten quit a workout.

I am currently reading my first Stephen King book in years. I have read Misery, Salem's Lot and The Shining. All of which scared the hell out of me. When Annie hobbles Paul in Misery I was horrified.

My favorite Stephen King novel was The Eyes of the Dragon. This is a rare book that I have read multiple times. If I remember correctly he wrote this book for his daughter, and I think that is part of why I liked it as much as I did.

I don't like scary things much. I don't watch scary movies, and I haven't read another Stephen King bok in so long because the ones I have read have been so scary. When you are close to 40 than 30 you really shouldn't have to sleep with a nightlight, so I avoid anything that might cause me to want to. 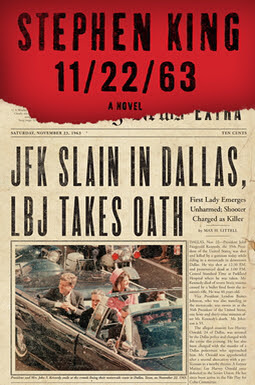 I ran across 11/22/63 a few weeks ago and thought the premise sounded very interesting.

Jake Epping is a thirty-five-year-old high school English teacher in Lisbon Falls, Maine, who makes extra money teaching adults in the GED program. He receives an essay from one of the students—a gruesome, harrowing first person story about the night 50 years ago when Harry Dunning’s father came home and killed his mother, his sister, and his brother with a hammer. Harry escaped with a smashed leg, as evidenced by his crooked walk.

Not much later, Jake’s friend Al, who runs the local diner, divulges a secret: his storeroom is a portal to 1958. He enlists Jake on an insane—and insanely possible—mission to try to prevent the Kennedy assassination. So begins Jake’s new life as George Amberson and his new world of Elvis and JFK, of big American cars and sock hops, of a troubled loner named Lee Harvey Oswald and a beautiful high school librarian named Sadie Dunhill, who becomes the love of Jake’s life—a life that transgresses all the normal rules of time.

Would you be willing to kill one person if you knew that millions of lives would be saved? What a great premise for story. If I am lucky I won't need a nightlight after this one.

Posted with Blogsy
Posted by Becky C. at 8:14 PM